Will Housing Save the U.S. Economy? by Amir Sufi

Sufi has a short paper on this issue that is worth reading.

My bottom line is that we need to temper our optimism on what  a housing recovery can do for the U.S. economy. I agree that house prices will continue to rise and new residential construction will steadily increase from its current very low level. This is good news. But we will not be returning to the boom years that preceded the Great Recession. The days when housing was the predominant force driving economic activity are gone, and I view that as a good thing.

Sufi makes a number of points, including the following two. First, the days of numerous cash-out refis (and 40 cents of consumption for every dollar of it) don’t seem to be coming back. 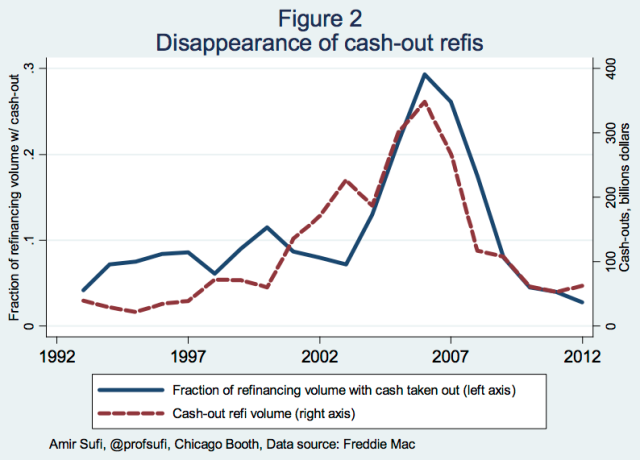 Second, all-cash buyers and investors seem to be playing a sizable role in the housing recovery, which means that marginal homebuyers who have much higher MPCs aren’t. Instead, they are probably paying higher rents, not fueling a lot of consumption via cash-out refis. 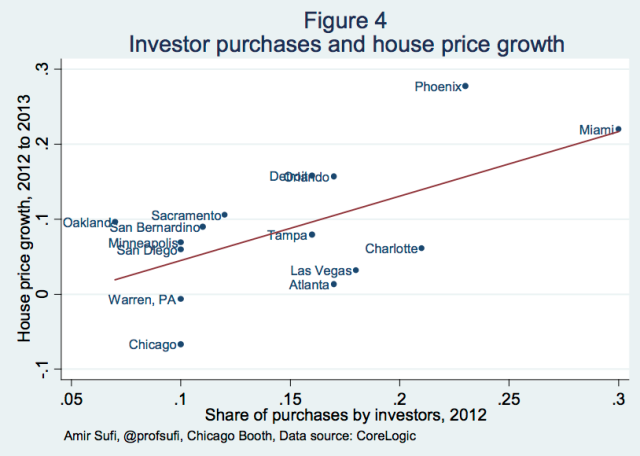 I believe we have learned a painful lesson from the 2002 to 2012 experience. We cannot rely on debt-fueled collateral-based consumption for economic growth. Easy credit fueled house prices and consumption during the boom, and the collapse in spending was exacerbated by excessive debt burdens and a failure to provide any relief to underwater homeowners. Fueling consumption through easy household credit may help in the short-run, but it inevitably has long-run painful consequences.

I'm an Assistant Professor of Economics at the University of Chicago Booth School of Business and a Faculty Research Fellow at National Bureau of Economic Research. You can follow me on twitter @omzidar. http://faculty.chicagobooth.edu/owen.zidar/index.html
View all posts by ozidar →
This entry was posted in Uncategorized and tagged Amir Sufi, Credit, Housing, Housing Finance, Housing Wealth, inequality, Middle Class, MPC, Refi. Bookmark the permalink.

3 Responses to Will Housing Save the U.S. Economy? by Amir Sufi