The Economics of Immigration

Given the interest and policy relevance (as well as Miles Kimball’s immigration tweet day), I thought I’d write a post on the theory and empirics of the effects of immigration in the labor market.

A simple starting point for thinking about the labor market effects of immigration begins with the supply and demand for labor.

Supply:
An increase in the number of immigrants increases aggregate labor supply. You can see this in the chart as a rightward shift in labor supply (from S to S’) since the number of people who are willing to work for a given wage increases for all wages. Based partially on this simple framework, some believe that immigration decreases wages. Prominent economists in the immigration literature such as George Borjas espouse this “labor demand is downward sloping” view of immigration and argue that increased immigration adds to the supply of workers and depresses the wages of natives (say from W0 to W’).

Demand:
However, increased immigration does more than shift supply right, it also increases demand. David Card is among the most prominent economists who have emphasized the idea that “demand also shifts out.” This view of immigration holds that the effect of immigration on natives’ wages is ambiguous – it depends on the relative size of rightward shifts in supply and demand. Here are a few reasons why demand shifts out:

So where does that leave us? Immigration causes outward shifts in both supply and demand – knowing which shift is bigger and hence whether wages go up or down is an empirical matter. 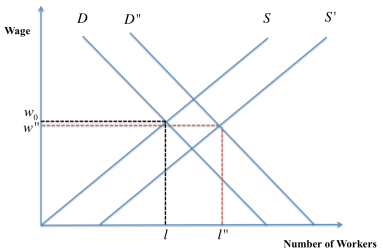 Taking this simple model to the data, where we would try to estimate how inflows of immigrants affect wage changes, requires thinking hard about a few issues:

I don’t have time today to write a full review of this literature, but this nytimes magazine article has a nice account of some of the key papers and their estimates of the impacts of immigration on wages and employment. Finally, I should mention that Peri et al find that an influx of STEM workers of 1% of total employment raises the wages of college educated workers (both STEM and non-STEM) by 4-6%. An overly simplistic way to think about why STEM and college educated natives could be complements is that finance and legal work complement the high-tech industry. Finally, below find two sets of estimates (that reflect the Supply and Demand views respectively) from the Hamilton Project:

I'm an Assistant Professor of Economics at the University of Chicago Booth School of Business and a Faculty Research Fellow at National Bureau of Economic Research. You can follow me on twitter @omzidar. http://faculty.chicagobooth.edu/owen.zidar/index.html
View all posts by ozidar →
This entry was posted in Uncategorized and tagged David Card, Giovanni Peri, Hamilton Project, Immigration, Jobs, Labor, Miles Kimball, Wages. Bookmark the permalink.

4 Responses to The Economics of Immigration