The Pace of the Recovery: Output and Employment Growth Since 1985

Laura Tyson has a piece today on the slow pace of the recovery:

Since 2010, annual growth of gross domestic product has averaged about 2.1 percent. This is less than half the average pace of recoveries from previous recessions in the United States since the end of World War II, according to a recent study by the Congressional Budget Office. Both potential G.D.P., a measure of the economy’s underlying capacity, and actual G.D.P. have grown unusually slowly compared with previous recovery periods.

Slow G.D.P. growth has meant slow growth in employment. Payroll employment has been expanding at a rate of about 150,000 jobs per month during the last two years, only slightly above the growth of the labor force. Employment growth has been largely consistent with overall G.D.P. growth and with the “jobless” pattern of the 1990-91 and 2001 recoveries.

Here’s what output and private sector employment growth look like since 1985: 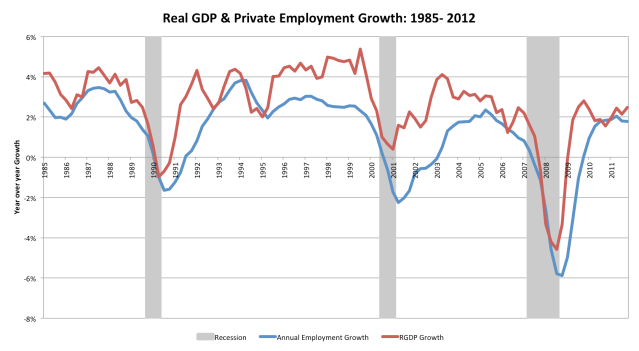 I'm an Assistant Professor of Economics at the University of Chicago Booth School of Business and a Faculty Research Fellow at National Bureau of Economic Research. You can follow me on twitter @omzidar. http://faculty.chicagobooth.edu/owen.zidar/index.html
View all posts by ozidar →
This entry was posted in Uncategorized and tagged Fiscal Cliff, Growth, jobless recovery, Jobs, Laura Tyson, Stimulus. Bookmark the permalink.